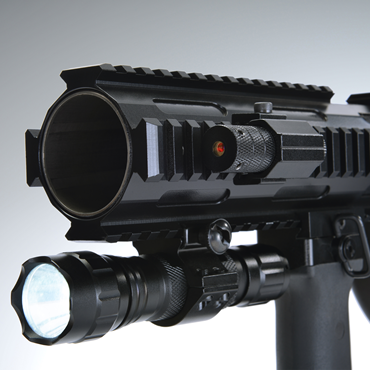 When fully extended, the stock is almost parallel with the barell. It is locked in that position for shorter ranges. As the range increases, the stock can be raised slightly to facilitate sighting. The 40 mm Grenade Launcher is fitted with an Occluded Eye Gunsight (O.E.G), which means that the weapon is fired with both eyes open. One eye looks into the sight, and the other eye then has an unimpended view of the target. The sight is operational in poor light conditions as long as the target can be seen. The sight is calibrated in 25-metre increments, from zero to 375 meters, and is cammed to the left.

The weapon operates on revolver principle with a spring-driven gas operated cylinder. To open the weapon for loading, grasp the pistol grip with your right hand and the fore grip with left one. Immediately in front of the cylinder, attached to the centre pin, there is a semi-circular piece of metal. Pulling it with your left thumb release the pistol grip and back plate. Then, swing away the pistol grip to the right, exposing the six chambers. After loading and pressing the trigger, the firing pin is cocked and released to the grenade. to compensate automatically for drift.

Gas pressure on the piston unlocks the cylinder and allows the spring to rotate it until the next chamber is aligned with the firing pin, whereupon the next round can be fired. Standard accessories include a bag with cleaning rod and oil bottle. A variety of rounds such as HE, HEAT, anti-riot baton, pyrotechnic or irritant can be fired at a rate of one per second. The RBG-6 also fires Mod94 40 mm low velocity grenades to a maximum effective range of 375m

All vital parts are hard chromed 60 HRC (Hardness on the Rockwell "C" scale).
Resistant and protected agains all sort of weather conditions (for example: six months of salt fog).